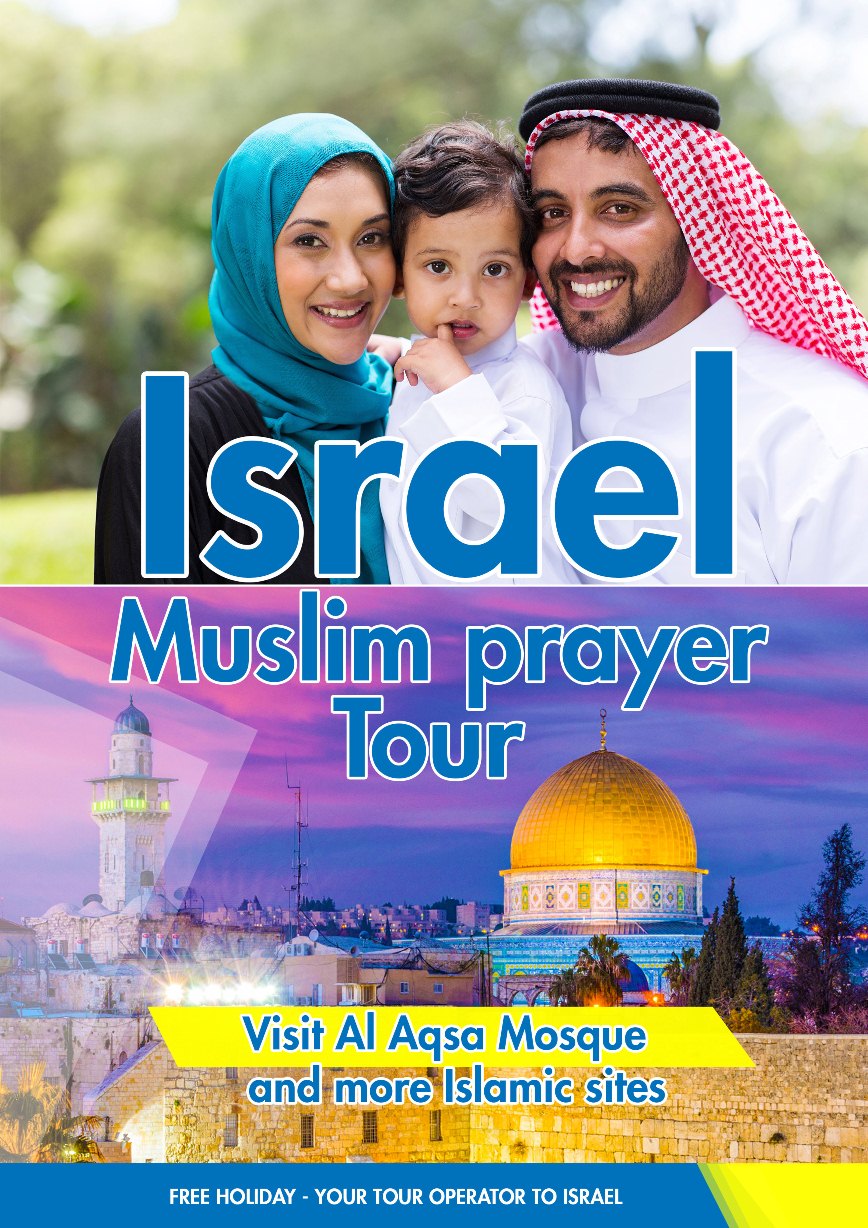 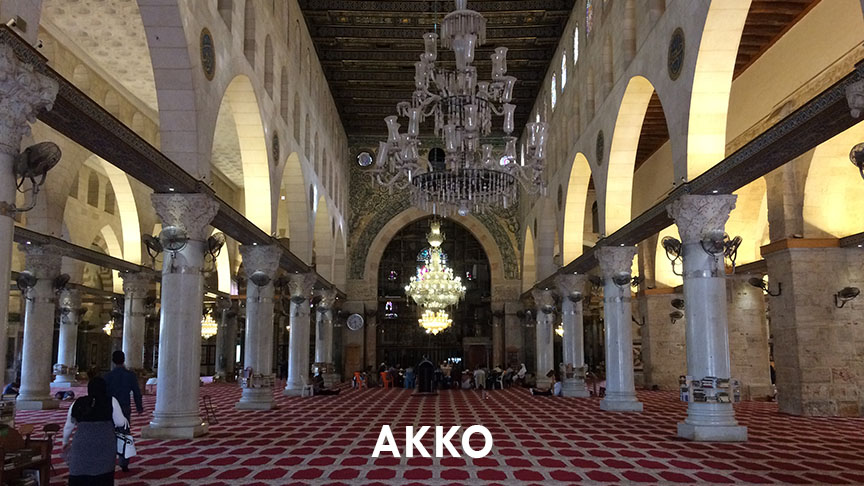 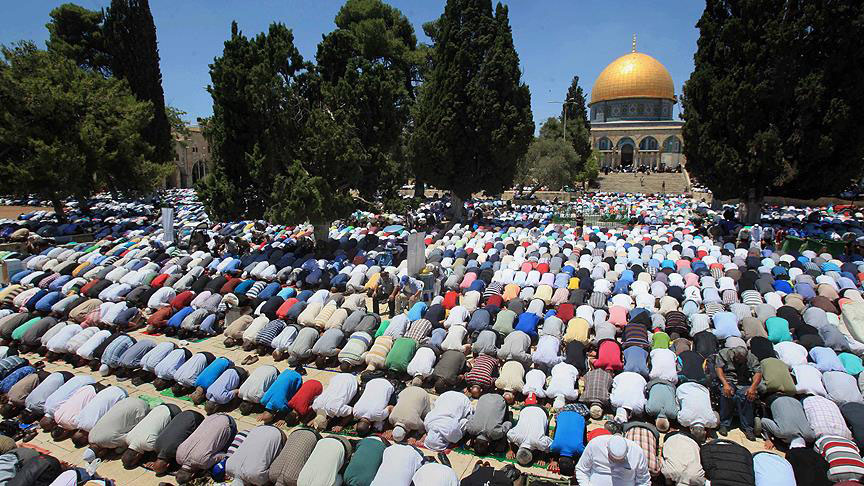 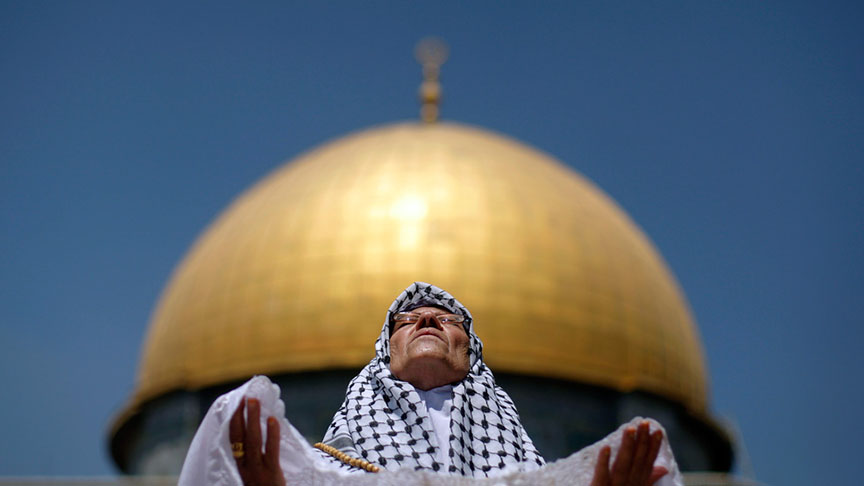 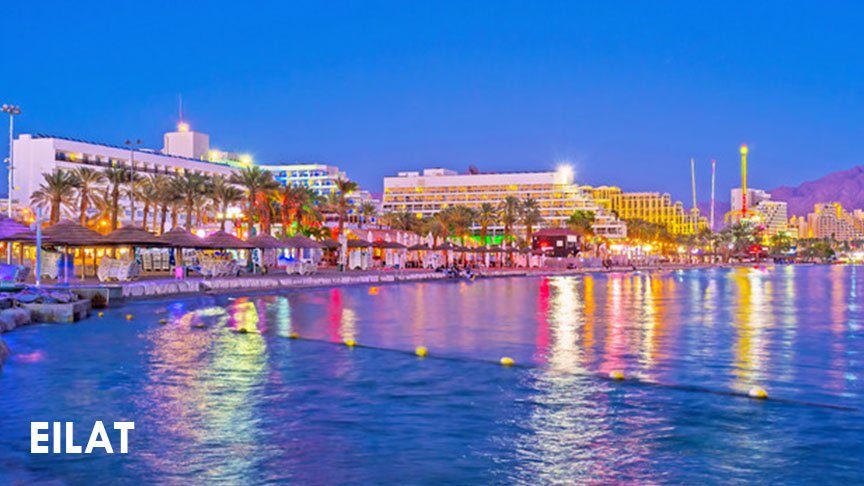 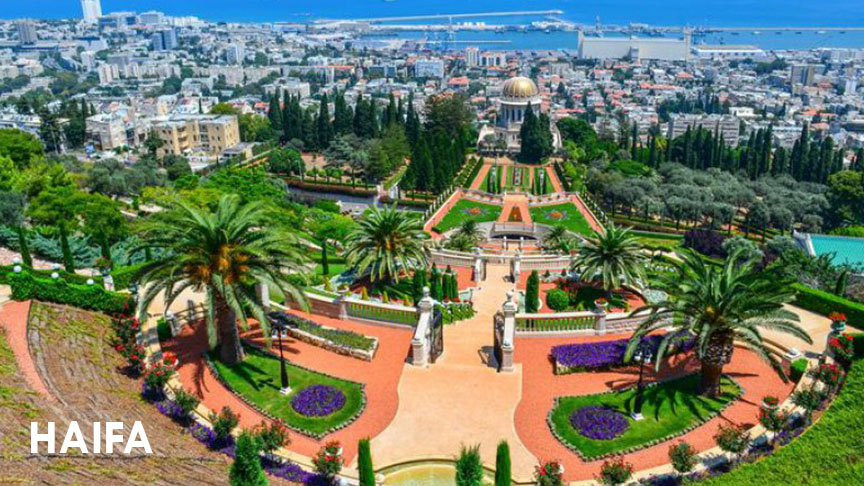 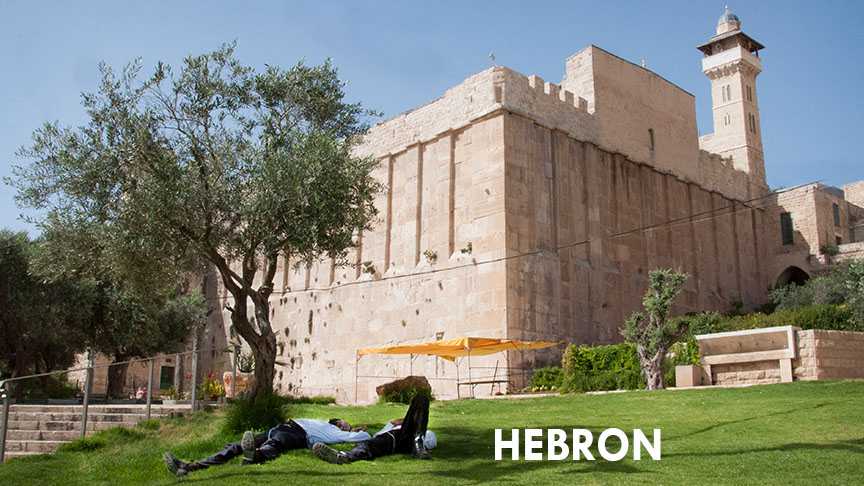 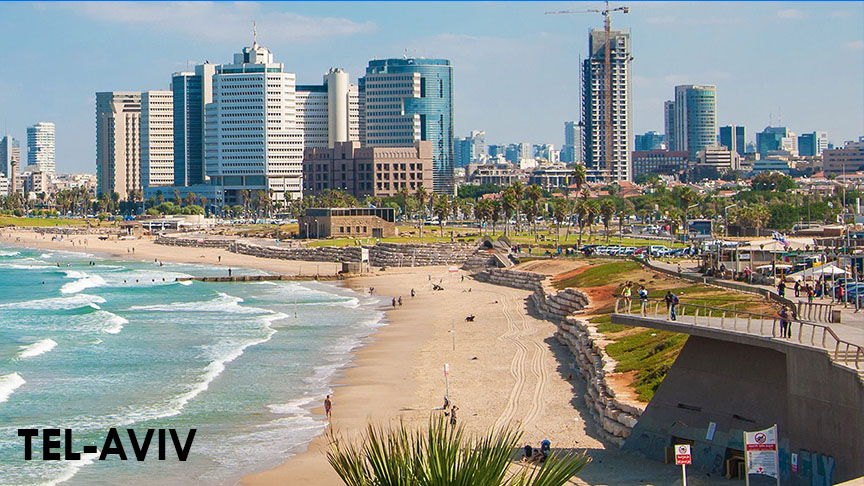 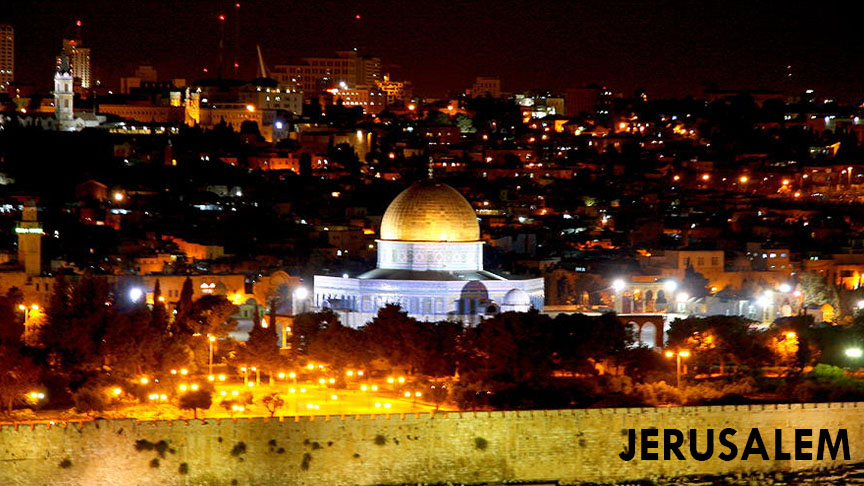 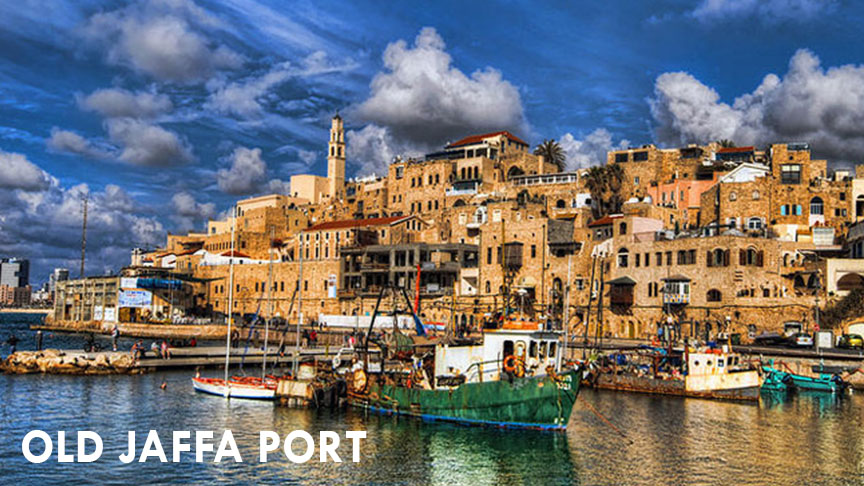 A Once In a Lifetime Experience

“Free Holiday Limited” tour representatives will welcome you at Ben Gurion International Airportand take you through the immigration and customs process after which they lead you to or luxury Tourism-bus. From the airport we will drive to Jerusalem to start your trip.

Transferred to Jerusalem. Have breakfast at the hotel, freshen up and get ready to start your trip You day. Enter Jerusalem's old city to visit Haram Ash-Sharif(Temple Mount) and enter the Dome of the Rock. Visit the marwny mosque and Alburaq mosque and tour around masged aqsa Wander around the Christian and the Muslim quarters and finish at the oriental bazaar at the Jaffa Gate. Continue in old city to see the wall of Suleiman the Magnificent and the Davids tower. Continue to Mount Zion and see the Mosque of the Prophet (Nabi Daoud) Overnight Jerusalem

We start the day at the different Mosques on top of the Mt. of Olives. (maqam rabiaa aladwia masged Salman alfarsi). From here there is a panoramic view over Jerusalem’s old city, with the magnificent Dome of the Rock in its centre. Then we walk/drive down to the marble-memorial of Mujir-e-Din al Hanbaly, a medieval philosopher, located just above the Tomb of Sittna Marriam (Mary) in the Garden of Gethsemane. We continue with a short hike to visit the tomb os shaba(close friends of Mohammed peace be upon him). (Shdad abn ouss and obada abn alsamt). We shall enter the Al Aqsa mosque for prayer and meeting with aqsa imam. Overnight Jerusalem

Start with Fajer prayer at aqsa. Friday the itinerary fir this day will include:
Full day of the muslim sites of Jerusalem we star our day at the Mount of Omar (Jabl mokaber).

Where Khalif Omar saw aqsa for the first time before entering Jerusalem. Then we will enter the city for jumu’ah prayers. Further in the city we will visit the Wailing (Western) wall, in the Jewish Quarter, as well as the church of resurrection, where the prophet Issa was crucified and buried, and the Omar mosque built in front of its entrance, at the place where the victorious Omar prayed upon entering the Holy City. Dinner and overnight in Jerusalem

After breakfast we start the day at avisit at Nebi Samuel, tomb of the prophet Samuel. Continue to visit Bethlehem to see the tomb of Rachel and milk Grotto (Moghhart Es Saiyideh). There is a chance for shopping in the colorful bazaars.

Continue to Hebron to visit the Tomb of the Patriarchs Abraham, Isaac and Ishamel. Visit Naebi Daniel where there are important ruins of mosques.

These ruins are called Haram Ramet El Khalil (Abraham the friend of God). This is the tradition site of the Oak Tree under which Abraham met with the Angels of God. From Hebron, on the way to Jericho, visit Maqam Nebi Musa. Overnight Jericho or Dead Sea

After breakfast we drive to dead sea-lowest place on earth. Swim and float at the sea and experience the magis of salt water lifting you to the surface. Cover yourself with the mud whish heals different parts of yor skin. After the Dead Sea we drive back to Jericho to an oasis in the Judea desert and the world’s oldest town. Visit the Ummayad Palace (Hishams Palace) which includes a mosque, colonnaded Forecourt and commercial pool built by Caliph Hisham lbn Abd El Melik. Proceed up the Jordan valley via Tiberius to the Horn of Hittim, the location of the defeat of the crusaders by Saladin. Proceed to Nazareth to visit the ElAbayed and El Salam Mosque Overnight in Nazareth

After breakfast we drive to Acre, an important ancient port. Have a free time to work the streets at the old city and enjoy the view of the Mediterranean.

Follow the coast down to Haifa, a large city Port. Ascend to the summit of Mt. Camel for a panoramic view of the entire bay area. Visit the cave of the prophet Elijah, the Istikal mosque and the Bahai Temple with its beautiful Persian gardens. Visit the Druze village of Daliat-El-Karmel or Isifiya or Keferkama a Cirassian village. Drive to Tel Aviv. Overnight at Tel Aviv

Tel Aviv, often called “the city that never stops,” and is the country’s economic and cultural center. It’s a lively, active city with entertainment, culture and art, festivals, and a rich night life.
Tel Aviv is Israel’s center for culture and entertainment. The city has more than 20 museums; Tel Aviv is also the national center for night life and entertainment and is filled with featuring music of all types, restaurants, coffee houses, movie theaters, auditoriums, and concert halls.
The beachfront of Tel Aviv has bathing beaches and activities waterfront promenade. Eleven of the city’s Mosques like Al-Bahr Mosque, Hassan Bek Mosque, Mahmoudiya mosque,, churches and monasteries.
Early morning transfer to the Mahmudiyye mosque in Jaffa for early prayers.
Return to the hotel for breakfast. We will enjoy the hotel facilities and the beautiful beach, tour Tel Aviv city and after tour around the ancient city of Jaffa.
Visit the Mahmudiyye mosque noteworthy for its roman columns and azur mosque with its mine domes.
From Jaffa a very short ride ti visit the Carmel Shuk (market) and visit Neve Tsedek the first community to live outside Jaffa-the beginning of Tel Aviv.
The afternoon will be free to experience the city and have free time for shopping in the big malls of Tel Aviv.
Late evening drive to Ben Gurion Airport for departure.
Our guide will help you with the formalities before bidding you farewell,

WELCOME BACK TO KENYA (WEDNESDAY)